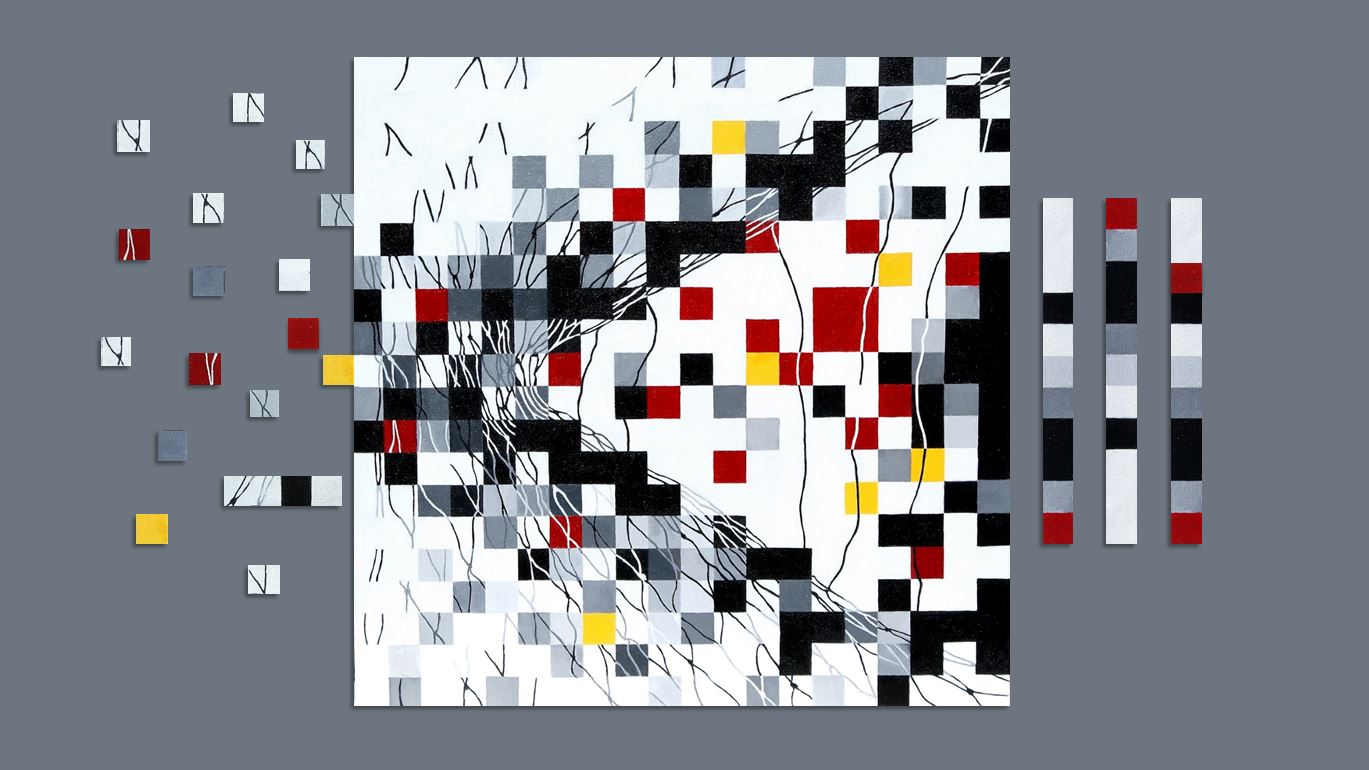 My works have been influenced by personal experience relating to ‘interconnectedness’ - social, ecological, digital, art historical - as well as questions of uncertainty and ambiguity. The net serves as a vehicle to explore these issues through the lens of painting (or drawing) and shifting tensions arising from dynamic interactions between pictorial and formal components (colours, rigid geometric elements, fluid/organic lines, texture). Forces pull in different directions, tension and release or ensuing fragmentation reflect various states of being or a response to current events. The associative potential or metaphorical connotations of the net interplay with formal enquiry:

The net’s amorphous character and malleability make it difficult to predict which state it will adopt, and there is an ambiguity over whether it plays a positive or a negative role. It can entrap or protect, save life or destroy it (e.g. safety nets, fishing nets, the internet & social media, networking).

The net is a grid ‘gone haywire’, freed from the rigid structure, but potentially unstable and dependent on structural support for reliability.

In the pictorial space, the net’s fluctuating movement and suspense is captured, but still and frozen in time. It is left to the viewer to imagine its flow or shape before or afterwards, and which metamorphosis it might undergo. Colour permutations underpin this capacity for adaptation and transformation.

Intertwinement of opposing elements raises questions about our entanglement with each other, with nature and with the digitized world. Tensions might resolve, but destabilizing or disturbing elements put a precarious equilibrium at risk, implying impermanence, unpredictability and fragility.

In its contorted state, the net is suggestive of organisms or humanoid, curved shapes similar to moving bodies or body parts, evoking our human struggles, isolation and distress or relief. While some connections form, many break. Some areas show coherence or resilience, while others fragment. Tensions ebb and flow.

These tensions and the effects of contrasting elements, such as chromatic, tonal or spatial switches, Gestalt Principles, and anthropomorphic lines and shapes, serve to explore the viewer’s perception and psychological responses.

The process involves use of digital images of my own drawings/paintings/tracings of nets, manipulating them and translating them into paintings. New colours, lines and constellations emerge. As manifestations of human agency, subtle brush traces and surface marks contrast with graphic elements. Gradual build-up of the work conveys a sense of control and calmness, slowing down the speed of life in an apparently out-of-control world.